The railway station for servicing the Paveletsky railway, laid in 1898-99 not far from Kozhevnicheskaya and Kolomenskaya-Yamskaya (at present Dubininskaya) streets, was constructed in 1900 by the architect A. Krasovsky and became an important architectural monument of the capital.

The city authorities had a serious approach to construction of a new railway station. A dignified committee, consisting of famous professionals in their business – engineers, constructors, industrialists was set up. They had to select the most suitable place for a railway and cargo station. Several variants were considered. In particular there were suggestions to build the “station in the area of Drovyanaya and Konnaya squares” (now Shabolovskyi TV center is situated in that place). They also considered the possibility to locate the station near “the Spasskaya zastava” (today it is The Square of the Krestyanskaya zastava).

A number of opinions and arguments were voiced in favor of this or that variant, until all that resulted in the agreed decision to place the new station at Zatsepa. Zatsepa is an ancient Moscow district. Its name is resulted from the fact that the district was “behind the chain” in olden times separating Mytnyj dvor, where they took “myt” - state duty from the city.

For the station construction they allocated 15 dessiatinas of land, and 64 dessiatinas for the cargo station in Zhukov passage (1 desiatina = approx. 2 3/4 acres). The allocated for construction land along the right bank of the Moskva river from Danilov Monastery to Zatsepa was a vast inundated boggy lowland. Keeping in view the nature of the terrain and all features of the area about 70 thousand cubic meters of soil was dumped into this lowland. But the constructors did not have to spend money for demolition of structures – simply there were no structures.

Respectable station building was constructed in accordance with all canons of that time: outer walls were 2 ½ bricks thick – at that time it was a serious factor of safety; crushed stone foundation; outer surface of the walls was decorated by special bricks, plinth – by cut stones, the vestibule and halls were decorated by stucco moulding. The feeling of solidity and respectability could be felt in everything.

Since the station was constructed in tsar times, while constructing it, the existent at those times “social norms” were observed: while calculating the area for one elite class passenger (first, second) up to one square sazhen (4.5 m2) was assigned, whereas for a passenger of a lower level – only 0.33 sazhens. High and spacious operation hall in the center of the building separated the rooms for the first and second class passengers from the ones of the third class.

For its times the station was rather comfortable, properly planned, had a very original heating system and extraordinary amphora-shaped turret that acted as a flag post.

Familiar to us “Paveletsky” station nowadays, for some time after construction in the documents was called “Saratovsky”, and the station square - “Saratovskaya”. In many respects it was due to the fact that the Paveletskaya railway connected the capital with Middle and Lower Volga region and Saratov became the largest point in this direction, and the railway Administration was permanently settled in this city. And it was only after the First World War that the station was called Paveletsky.

On January 23, 1924 a train brought the coffin with V.I. Lenin body to the Paveletsky station, after which the Saratovskaya square was renamed into Leninskaya square, and the funeral train was placed for eternal parking into the station museum.

During 1982-87 the Paveletsky station was reconstructed by a group of Soviet architects headed by A.B. Gurkov, S.D. Kuznetsov, A.R. Voronin. Habitual architectural forms of the old station building – cupola completion, décor nature were preserved. Along with it the renewed Paveletsky station exceeded the old one six-fold in space, and four-fold in traffic capacity, but what is most important it became much more comfortable and convenient. Now it is able to receive, serve and accommodate about 10 thousand people per hour in its halls – this is the level of rather a big transportation facility.

Nowadays one can get to such towns of Moscow region as Vidnoe, Domodedovo (and International Airport Domodedovo), Stupino, Kashira, Ozherelye by the suburban train, as well as many big cities of Russia: Tambov, Astrakhan, Volgograd, Gudermes, Krasnodar, Lugansk, Lipetsk, Novorossiysk, Stavropol.

After collapse of the Soviet Union the Paveletsky station obtained the international status: trains to the Ukrainian city Donetsk start from the station.
Photos (6) : 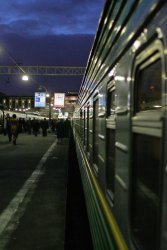 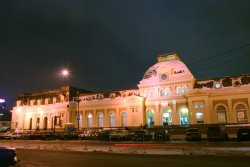 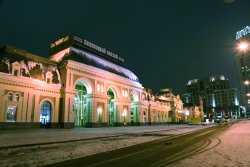 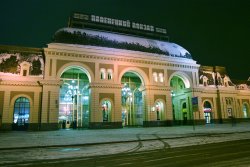 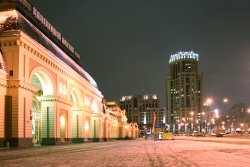 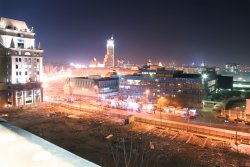