The Hotel "East-West" is located in the very center of Moscow on Tverskoy boulevard. This first Moscow boulevard was laid out in the end of XIII-th century and it was settled and built out with the flower of noble society, so it acqured inimitable colour and became a favorite walking place for many generations of Muscovites and the guests of our capital.

The Hotel building presents itself an old mansion in Russian style. Its main facade was finally restored and redecorated in 1880-90. Interior lay-out and decoration of rooms combine the comfort and design of modern life and the former magnificence of a noble estate.
Photos (1) : 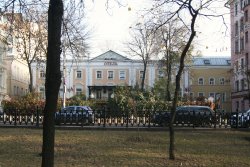