Hotel Metropol owes its birth to the famous patron of art Savva Mamontov. To build a hotel of a European level, he gathered together young talented artists and architects: Walcott, Vrubel, Kekushev, and Chekhonin. The hotel building is an outstanding example of the modernist era, the Silver Age of Russia art (the end of the 19th - beginning of the 20th centuries). Hotel Metropol was opened in 1901. The Muscovites would come in crowds to see the "Tower of Babel of the 20th century":that was how Hotel Metropol was called those days. None of the other hotels in Russia except the Metropol could boast of hot water, refrigerators, elevators, and telephones. The rooms and restaurants were occupied with sophisticated public. The Metropol would often see famous manufacturers (Morozov, Ryabushincky) and the people of art (Bryusov, Komissarzhevskaya, Shalyapin, Rakhmaninov).

In 1917, the new masters came to Hotel Metropol - and the gun roar broke in. The Bolshevist government moved from Petrograd (former St. Petersburg) to Moscow, and Hotel Metropol turned into the residence of the All-Russian Central Executive Committee (RCEC). It was then called the Second House of Soviets. Chicherin, Sverdlov, and Bukharin lived and worked at the Metropol. In the 1930s the Metropol was given back its original status of a top-class hotel. If the Soviet government wished to win the favor of the foreign guests, among who were Bernard Shaw and Bertold Brecht, it would usually accommodete them in the Metropol. During the World War II correspondents of Western newspapers and magazines prevailed among the hotel's lodgers, a press center was organized at the hotel.

In the mid-1950s "the Khrushchev Thaw" set in. More and more foreign tourists would come to Moscow and stay at the Metropol. The ordinary Soviet citizens would not stay at the hotel as a rule, although there was a 70-bed hostel for those coming on business trips. The payments in some hotel bars and restaurants were made in hard currency only, i.e. those places were mostly attended by foreigners.

The years were passing by - and Hotel Metropol was growing old and ramshackle. In 1986, it was closed for renovation. After the long debate on the renovation concept the architects found the golden mean: it was decided to reconstruct Metropol using the old drawings while at the same time equipping it to the latest technological standards. Metropol owes its second birth to concerted efforts of Russian and Finnish architects, engineers, artists. The perestroika period in the USSR (1985-1991) coincided with the Metropol renovation period (1986-1991). The Hotel was closed for renovation back in the USSR, but opened in 1991 already in the new Russia. Foreign commissions were right in their high appraisal of the restored splendor of the hotel as well as of its highly-qualified staff. The Metropol received the highest hotel rank - five-star brand.

In 2001, Hotel Metropol celebrates two significant dates: one hundredth anniversary since the opening day, and ten years after it has been fully renovated. The prominent Russian stage director Konstantin Stanislavsky used to say that "a theater starts with a cloakroom". To rephrase, it is possible to say that a city starts with a hotel. Hotel Metropol has rightfully become a symbol of Moscow for many foreign tourists and businessmen. Some of Moscow's old buildings indeed possess a magnetism of the kind. They attract events; within their precincts human fates have been intertwined; they become a part of the history One of such buildings is Hotel Metropol. Besides fulfilling the responsibilities of a hotel at large, the Metropol carries out a mission of a "historic hotel", a hotel-museum. Everyone who 1 visits the Metropol will have a glimpse of Russian history and culture, and the staff of the hotel will do their best to make the guests feel themselves at home. 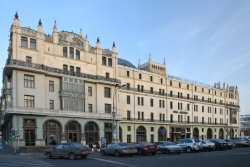