The monument to Ivan Bunin

The monument to the great Russian writer Ivan Bunin was unveiled at the 137th anniversary of his birth – on October 22, 2007. The public garden near Povarskoy street was not accidentally chosen. Here, in house No.26 the writer used to live at his wife's parents before his emigration – first to Odessa, where white guards still kept, and then, via Konstantinopol, to Paris.

Sculptor - people's artist of Russia Aleksandr Burganov and architect, professor of International architecture academy Victor Pasenko are the authors of the monument. The creative activity of Burganov is inseparably connected with the Bunin subject. He is the author of the monument in Voronezh – at the birthplace of the writer, and also of a bronze bust to Ivan Bunin for the gallery «People-legends» that was placed in Afanas'evskom lane.

The new bronze monument was presented to Moscow by the «Bunin's heritage» association and museum of classic and modern art «Burganov-center».

More than 10 years passed from the concept to implementation of «Bunin in bronze». Initially it was planned to unveil the monument in 2003 at the 50th anniversary of the writer's death, but the plans did not succeed.

At the ceremony of unveiling of the monument Aleksandr Burganov told that there were several variants of the composition: Bunin sitting with a dog, Bunin reading a book. In the result the bronze figure of the writer, meditatively looking in the distance, is situated on a small, strict in shape granite pedestal. The monument looks quite wholly, it perfectly blended with an ancient public garden with a long-lived elm-tree. Bunin used to walk there and then always dreamt to come back.

Ivan Bunin was the first Russian writer to get the Nobel prize in literature. He was born in a family of noble in 1870 in Voronezh. He started his literary activity, when he was only 17. In 1909 being a recognized writer he was elected by an honourable academician of Petersburg Academy of Science.

In his pre-revolution activity Bunin nostalgically depicted impoverishment and dawn of noblemen mansions, cruel way of life of Russian village.

Bunin spent the revolution winter of 1917-1918 in Moscow. At first he got engaged in literary life that, despite of everything, during destruction and famine, was still going on. He would visit the «Writers book-printers», take part in literature circles. And still, being the same age with Vladimir Lenin, Bunin did not accept the October revolution that is proved by his diary of the Civil war period under the title "Cursed Days". The writer left the country.

Everything, that was written by him in the emigration, was about Russia, Russian person, Russian nature. Upon writing his autobiographic novel "The Life of Arsenyev" (1930), where he reconstructed the Russia of his childhood and youth, Ivan Bunin was awarded a Noble prize. He used to say to his wife that «he couldn't live in a new world, that he belonged to the old world, the world of Goncharov, Tolstoy, Moscow, Petersburg; that the poetry was only there...»

Bunin lived a long life, survived the fascist invasion, rejoiced the victory over it. At the age of 83, on November 8, 1953 he died in Paris.

Nowadays admirers of Bunin's activity want the public garden with the monument to be named after him, and his museum to be opened in the house, where the future Noble prize laureate used to live.
Photos (2) : 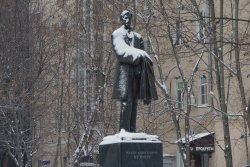 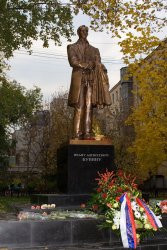