The monument to Maxim Gorky

The monument to the great Russian writer Alexey Maksimovich Gorky temporarily, till the end of 2007, shifted from the square at the Belorussky station to the Park of Arts at the Krymsky embankment. The reason is that the capital authorities started a major reconstruction of Tverskaya Zastava and construction of commercial-entertainment complex underneath.

Update: Monument was returned back in August of 2017.

The monument to Maksim Gorky was unveiled in the square near the Belorussky station on June 10, 1951. At this place in 1928 Maksim Gorky spoke in front of the Moscovites who solemnly met him when he returned back to his Motherland from Italy. At that time the Tverskaya street – main street in Moscow – was named after him.

The decision to erect the monument to Gorky was taken soon after the death of the writer. The work was started by a famous sculptor Ivan Shadr. After the sculptor's death in 1941 the work over the monument was continued by Vera Mukhina, also famous sculptor, the author of the monument «Worker and kolkhoznitsa».

With the beginning of reforms of the Russian society in 1990, the Gorky street was again renamed. Fortunately, the monument to the revolutionary writer, «Shearwater» as he is often called, remained intact. The creative work of Maksim Gorky is much wider than those frames into which he was put by official literary criticism. It may happen that the Russian reader will again reveal for himself «Old lady Izergille» and «The Mother» and «Klim Samgin» and many many other things.

During the recent years the monument to Gorky has become the first one in Moscow to be removed due to construction works. The monument to Pushkin at the Pushkinskaya square will follow the pattern. Other monuments left their places either due to political reasons (Dzerzhinsky, Sverdlov, Kalinin) or due to repair of the monuments themselves («Worker and kolkhoznitsa»).
Photos (7) : 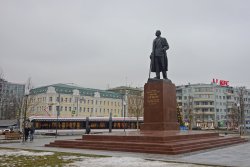 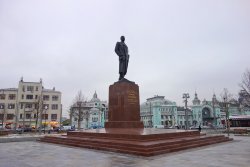 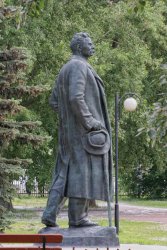 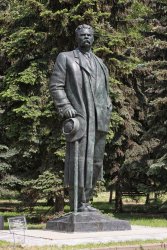 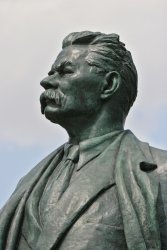 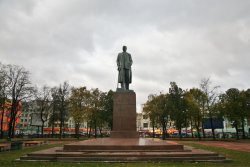