The monument to Abai Kunanbaev

Every nation has its spiritual authorities, whose works express the essence of this nation soul. For Kazakhs this authority is an outstanding poet and thinker of the XIX century Abai Kunanbaev (1845-1904). Like nobody else Abai brought his people to the heights of the world spirit – translated Pushkin and Lermontov, Goethe and Schiller, Byron and Mickiewicz.

The bronze monument to Aabai Kunanbaev was unveiled in April 2006. It is a gift of Kazakhstan. The authors of the monument are sculptor Marat Ainekov, designer Timur Suleimenov, artist Eduard Drobitsky and architect Vyacheslav Romanenko.

Their perfect work organically blended into the scenery of Chistye Prudy and made that portion of the boulevard even more cosier. The figure of sitting Abai breathes peace. He seems to be inviting permanently hurrying Moscovites to stop, look around and think about life.

The presidents of Russia and Kazakhstan Vladimir Putin and Nursultan Nazarbaev were present at the crowded ceremony of unveiling the monument.

Everything that great Abai called upon remains relevant today when Russia and Kazakhstan have split into separate states. Unfortunately there exist some forces, for which even this is not enough. Using beautiful words as a cover they try to make Russian and Kazakh people quarrel. When the decision of Mossovet to erect the monument to Abai on Chistoprudnyi boulevard has become known, there immediately emerged a proactive group of one-two persons, who were «concerned by the fact that the monument would disturb the historic ensemble of old Moscow». They were not interested what the monument will be like: «some stele with a head» the instigators used to say, collecting signatures under the letter of protest.

Of course in the embassy of Kazakhstan they were grieved, having learned about allegedly «negative attitude of the Moscovites to the monument to Abai». However, no local residents approached them, no protests and objections to the embassy were never voiced.

It has historically happened that for many decades the representation of Kazakhstan was located at Chistye prudy. That is why it was decided to erect the monument there. In Alma-Ata in the centre of the city there stands the monument to Pushkin. And this does not anger anyone. The provocation with the «letter of protest» had no success.

The monument to the great son of the Kazakh nation, that was erected during the Year of Abai in Russia and Pushkin in Kazakhstan, will be the eternal symbol of friendship between our peoples.
Photos (1) : 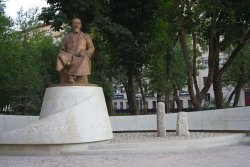