The monument to Vladimir Mayakovsky

March 6, 2006
The monument to the Soviet poet Vladimir Mayakovsky has its own history. The monument was unveiled on 28 July, 1958 at the square that has already been named after the poet. The author of the monument is the sculptor A.P. Kibalnikov. Six meter high figure of Mayakovsky solemnly towers above the square. Bold look of the poet-propagandist, poet-fighter is directed to rising sun. In his hand he carries a pocket-book.

The name of Mayakovsky for the Soviet officials was the symbol of revolutionary propaganda. For true lovers of poetry, especially the youth, Mayakovsky was a rebel, ready to honestly serve the cause, but not individuals, to poetize, but not to echo. It was the reason why the poetry-lovers started to gather in the evenings at the monument of Mayakovsky. Very often, till very late under the open skies, one could hear the poetry and hot arguments. The poetry of not only Mayakovsky but other poets were read. Somebody used to read his own poetry. At these spontaneous public debates new discovery of the poet and poetry in general was taking place. From talks about poetry they unintentionally switched to talks about life. One can say that the monument to Mayakovsky at the end of 50-60-ies naturally became the attraction point to those who after the XXth congress dreamt about renewal of social life. Naturally the authorities thought to put this poetic element under control and to reduce to zero.

During the period of reforms of the square, where the monument has been erected, it was given its old name – Triumphalnaya. Nowadays the square is under reconstruction. Multifunctional complex will be built over the closed for reconstruction exit from Mayakovskaya metro station.
Photos (4) : 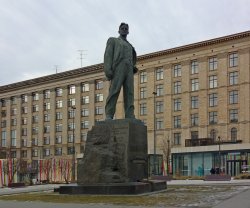 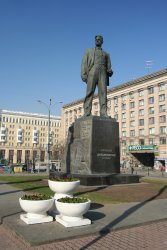 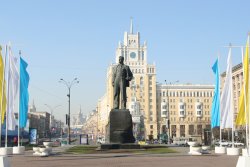 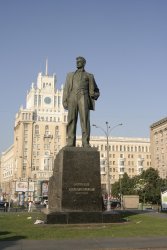