On June 1, 2006 the monument to an outstanding artist of the world culture, great puppeteer Sergey Vladimirovich Obraztsov was unveiled.

Sergey Obraztsov embodied all the best properties of Moscow intelligentsia. In 1931 he created his puppet theatre and for more than 60 years was its permanent head. The theatre performances were addressed both to children and adults. To see the performances of the theatre was an obligatory ritual not only for Moscovites but also for guests of the capital.

The puppets at the Obraztsov theatre performances were not afraid to say the things that were not safe to actors-people, they could impartially criticise the drawbacks of the society and even the mighty of this world. And besides, they were so recognizable, dear to everybody heroes of fairy tales: Buratino, Ivanushka, Cat in high boots, Baba-Yaga. The performances also depicted modern people with their habits, peculiarities and even manner of speech. And reprises that reflected the details of the life around them, invariably stirred the audience.

Are there many plays in the world that run with full house for 50-60 years in a row? In the Obraztsov puppet theatre there are few such plays, but the most principal one is the one that has been recorded in the Guinness book of World records for its longevity. It is called an «Unusual concert». This is a witty parody to an entertainment. After its first night in 1946 the play was shown in different countries of the world totally nine thousand times. The «Unusual concert» is the performance for all times, because pot-boiler and pop stock phrases are ineradicable», Sergey Obraztsov used to state.

The unusual concert begins as it should begin, with the master of ceremonies coming to the stage. This is a respectable puppet man in a tail-coat and bow-tie. Coming up above the screen he used to say in different languages of the countries, where they performed, his first best-known phrase: «Good evening, dear friends, how are you, do you understand me? Fantastic!» And added: «I wish I could understand what I say...»

In short, the Obraztsov puppet theatre is a unique live organism that reacts to this or that audience, whether it is children, adult, native or foreign.

Obraztsov took the most active part in construction of the new building for the theatre in Sadovaya-Samotechnaya street. Even the door-plates on Gentlemen and Ladies rooms – a cock and a hen – were personally painted by him.

According to the basic idea of Obraztsov not only another theatre was built, but the biggest in the world puppet centre with two auditoriums, winter garden, the most complete and the only in Russia library, where all known literature on puppets has been collected. With the largest in the world museum of theatre puppets, which does not have a single copy – all originals. With collection of priceless documents, photos, video, audio and cinematographic archives. This theatre is a real puppet empire attracting actors and directors from all over the world. Thanks to Obraztsov, Moscow has become a puppet capital of the world.

The famous puppet clock on the theatre facade has become a visiting card of the theatre. At 12 sharp under accompaniment of folk song «Vo sadu li, v ogorode» (In the fruit or kitchen garden) fairy heroes emerge from the depths of the mechanism. At this time people are certainly crowding near the theatre.

It seems that the monument to such a person as Sergey Obraztsov should have been erected in the first hand. But no! For five years the monument that was made to a hundredth anniversary of the actor used to be kept at some warehouse. Bureaucrats of culture have always had some excuses: there is no money, they did not decide how to place it, there are many underground communication lines that could possibly be damaged, and so on , and so for. They delayed till the time when the proposition to erect the monument in Paris Puppet museum has come from France.

So at last, by two dates – 105th anniversary of the Master and 75th anniversary of the Theatre – the monument was finally unveiled. The author of the bronze monument is the sculptor, peoples' artist of Russia Alexander Belashov. According to the author's idea, Obraztsov as though meets spectators at the main entrance to the theatre.

In his hands he keeps a puppet of Carmen. This is one of the most favorite puppets of the solo program. It is the puppet that even visited the Tehran conference in 1943, where Obraztsov used to perform in front of the «Big three». At the concert the puppet Carmen performed the famous aria about love, which «has the wings like a bird and cannot be caught», naturally as a parody number.

The porcelain statue of rather a young, forty-year-old Master, made in the beginning of 50s of the last century by a famous sculptor Ilya Slonim, has served as a basis for the monument. Obraztsov himself liked that miniature very much. Famous master Ilya Bylinkin made an architectural solution.

But not only puppets and theatre were the passion of Obraztsov. During his long life he has written 14 books and a number of publicistic articles. His films devoted to protection of man, nature and fauna - «Movie camera accuses», «Miracles are nearby», «Unbelievable truth», «Who needs that Vas'ka» - have become an event in a social life of the country.

Even in his 90, Sergey Obraztsov used to work very hard, and when asked, why he did not retire, answered in a joke: «You can't be unfaithful to puppets, they are not women».

Obraztsov was convinced that the art is the greatest diplomat, capable of bringing together interests of different people that are separated by thousands of kilometers. He has proved it with his own life.
Photos (3) : 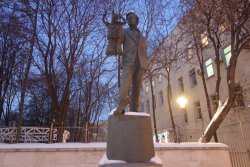 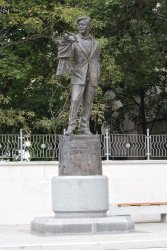 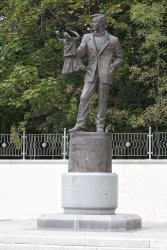