The monument to Peter I (Peter the Great)

The monument “300 years of Russian fleet”, which is more known as the monument to Peter I, was erected in 1997, and the same year it was presented by its author Zurab Tsereteli to Moscow. The monument is a figure of Peter I at the wheel of ship on high pedestal. It is placed in the river in the very center of Moscow, near the Kremlin.

This monument is the most disputable one in the capital. It's been done in traditions of monumental Georgian plastic arts. The place for the monument is thought to be improperly chosen and it is out of tune with surrounding architectural development. The relation of Peter's fleet to the Moskva river is not clear either. Evil tongues say that Moscow Peter is the altered Columbus that was meant for erection in the USA to commemorate the 500th anniversary of discovery of America. But the monument did not blend into the plans of Americans. And then the monument author removed the crosses and replaced the head. In general the gift did not please the Moscovites. It came to collection of signatures in favour to demolish the monument and one extremist organisation nearly blasted it.

Seeing such development of events one of the senators (Ramazan Abdulatipov) in 2002 suggested that the monument to Peter I should be shifted from the Moskva river to the bay of the Makhachkala city. According to the senator, in this way, the memory of the Persian travel of Peter I, who tried to set up relations with countries of the East, could be immortalized. In memory of that travel the town of Tarki was renamed into port Petrovsk and only in 1917 the city got the name Makhachkala. But the Moscow authorities lacked the desire to part with the monument.

The monument to Peter I can be seen from the windows of one of the most fashionable five-star hotels in Moscow - “President-Hotel” that is located at the picturesque bank of the Moskva river. Heads of states and governments of many countries in the world stay at that hotel. A magnificent panorama of Moscow and Kremlin can be viewed from the hotel windows and it gives the chance to guests to start getting acquainted with the Russian capital right from the hotel room.

Not far from the monument there is another original hotel – Motor-ship hotel.

“Valery Brusov” – a three-star “hotel in water” was opened in 2003. It is within a walking distance from the Christ the Savior temple and Red Square. (Update: In may 2017, the ship was moved out from the Krymskaya Embankment).
Photos (4) : 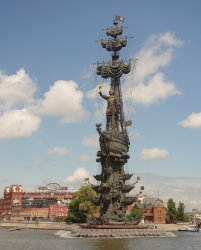 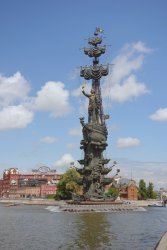 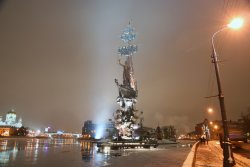 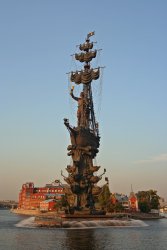