The monument to Ilya Repin

Ilyia Repin – was a prominent artist of Russia of the 19-20th century. His pictures are well known to every Russian person from childhood. These include historic canvases, for example, “Ivan the Terrible and his son Ivan on November 16, 1581”, which is called by general public “Ivan the Terrible kills his son”. And social pictures as well, such as “Barge haulers on Volga”. This canvas was produced to public in March 1873 and immediately brought fame to Repin. The portrait gallery, made by the artist, is also various. His pictures are kept in all major museums of the country, and first of all, in the Tretyakov gallery in Moscow and Russian museum in St Petersburg.

The monument to Repin was unveiled in 1958. The authors of the monument (made of bronze, granite) – are M.G. Manizer, architect – I.E. Rozhin. The monument to the artist was erected not far from the Tretyakov gallery in the square garden named after him. In the period of reforms the square was again renamed, as in ancient times, to Bolotnaya. Such renaming does not seem to testify either of love to Russia, its culture and history.
Photos (2) : 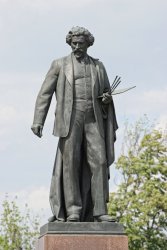 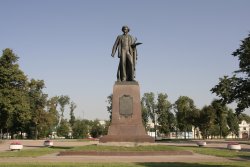