The place for the station was determined once and for ever: it was placed as per the order for official buildings according to rank in the same line with the building of the Nikolaevsky station. Architect Roman Ivanovich Kuzmin was invited from Petersburg for construction of the “building of the Yaroslavskoy railway”.

The emerged in 1860-1862 small white two-story building was distinguished by austerity and elegancy of lines, split up rhythm of windows, framed by small profiled rods, underlined its business purpose. The building was crowned by a flag post with the waving flag of department of transportation.

Till 1870 the trains from the Yaroslavsky station used to go only to Sergiev Posad. It was a road of 65 versts. There were only six stations there: Moscow, Mytishchi, Pushkinskaya, Talitsa (from 1904 - Sofrino), Khotkovo and Sergiev Posad. This was the road used by pilgrims to go to the Lavra.

Practically unchanged, this station remained till 1900, when the passenger building was increased by additional building as well as superstructure over the second floor. But this was clearly not enough.

In 1906-1907 the station was replaced by a new one, made in the neo-Russian style. It was three times larger than the previous one. Using the peculiar for old Russian art principle of connection of different in shape and size structures into one whole, the famous Russian architect F.O. Shekhtel managed to create a unique building. The outer decoration of the vestibule used plastically accentuated shapes of a giant arch, tropeic apron above it, semicircular pylons with conventionalized fortress turrets around it, high “tower-chamber roof” with valance and crowning ridge, which make the building look uniquely intricate. The vertical silhouette of the vestibule is echoed by high left tower with hip-roof finishing. The upper portion of the walls is decorated by ceramic ornamental picture with conventionalized flora ornaments in dimmed tones that correspond to overall dull colour of facades, which should cause associative links wit the Russian North. New for that time types of materials were used for construction of the station: reinforced concrete, steel structures, facing tiles.

The platform was constructed in 1910ies according to the design of L.N. Kekushev.

In 1965 – 66 the station was modernized, and the building with continuous glass wall was added from the side of the platform.

Today you can get to such cities sa Abakan, Arkhangelsk, Blagoveschensk, Vladivostok and Beijing from the Yaroslavsky railway station. Electricity powered suburban trains go to Alexandrov, Orekhovo-Zuevo, Fryazino, Balakirevo.
Photos (7) : 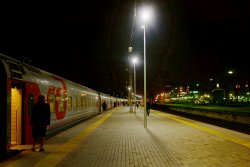 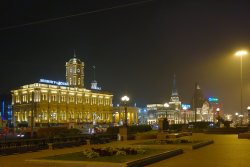 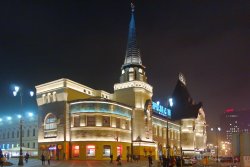 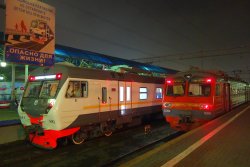 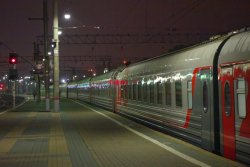 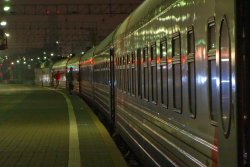 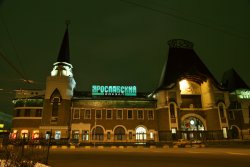