February 18, 2006
click to enlarge
"New Jerusalem" history, architecture and art museum was organized in 1920 within the precincts of the late "New Jerusalem" Resurrection (Voskresen-skiy) monastery is one of the largest museums is the vicinity of Moscow. It stores enormous historical, cultural and artistic treasures (icons, embroidery, castings, manuscripts, rare books, documents, Russian and West-European paintings and drawings, pieces of applied arts).

"New Jerusalem" Resurrection monastery is a unique phenomenon in Russian history and culture. The intention of its founder, patriarch Nicon (1605-1681), was really daring - to recreate the Holy Land of the Christians with ar exact copy of the church of the Holy Sepulchre with its topography and relics under Moscow.

February 18, 2006
click to enlarge
"New Jerusalem" architectural ensemble took shape comparatively in a short period of time from 1657 till 1697. At first the main task was to construct a grandiose Resurrection Cathedral having no equal in the rarity of its scheme, dimentions and richness of ceramic decoration in the Russian architecture of the XVIIth century. Its construction completed in 1685, the Refractory with the warm (winter) Church of the Nativity was built in the western part of the monastery, the ancient stone service quarters of Nicon's period (1658-1666) being used to form the ground floor of the new building. At the same time old wooden service quarters were replaced by stone ones. The fortress walls with eight towers and the Over-the-Gate Church of the Entry into Jerusalem built in place of wooden constructions in the 90s of the XVIIth century gave the final shape to "New Jerusalem".

"Palestine" under Moscow was planned and realized as a grandiose architectural and landscape complex. Besides the monastery it includes a forest-park area with springs, ponds, and canals adjoining the monastery rampart from the North and North-West, called the Gethsemane garden. Here on the picturesque bank of the Istra river you can see one of the earliest monuments of the "New Jerusalem" ensemble - a diminutive four-storeyed building combining the features of both religious and secular architecture of the 17th century called patriarch Nicon's hermitage. It was intended for secluded prayers of the "New Jerusalem" founder and was preserved in the monastery as a memorial monument.

February 18, 2006
click to enlarge
The Resurrection Cathedral is the significant and architectural centre of the "New Jerusalem" ensemble. It was built "in image and likeness" of the Church of the Holy Sepulchre in Palestine - the main sacred relic of the Christian world. European architecture knew many imitations of this church, but neither of them was aimed at recreating it in full with as great care and attention to details as it was done in "New Jerusalem". The Resurrection Cathedral repeats in full the dimentions, plan, and spacial structure of the Palestine original. But national basis has become apparent most vividly here. The forms of the Church of the Holy Sepulchre in Jerusalem seem to be translated into the Russian language: national analogue has been found to all foreign elements (large and small domes, a tent over rotunda, ceramic decoration etc.) Thus Resurrection Cathedral of the "New Jerusalem" monastery conceived as an imitation of the Church of the Holy Sepulchre has become an outstanding achievement of the national architecture of the 17th century.

The reconstructions of the cathedral in the XVIII-XIX centuries changed its exterior to a certain extent but on the whole it remained unchanged.

February 18, 2006
click to enlarge
At present "New Jerusalem" has been raised from the ruins which it was turned into by the war (the ensemble was vandalized in the winter of 1941). Having completed restoration of the architectural ensemble we intend to restore in full the Gethemine garden with its hydrosystem and that will make it possible to return historical appearance to the "New Jerusalem" monastery complex.

Since 1980 some monuments of wooden architecture removed from different parts of the Moscow region are exhibited in the park area of the museum: the Church of Epiphany, a peasant house-hold, a chapel, and a mill. In future they will make up a part of architectural and ethnographical museum exposition in the open air. 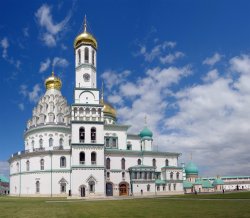 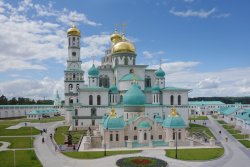 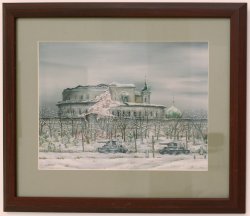 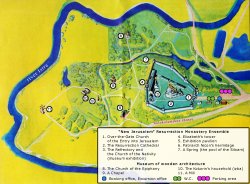 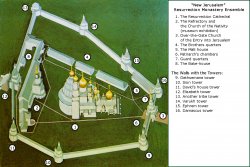